Elevated spaces in Tatami rooms, sliding paper doors, and transoms are part of typical Japanese residential architecture, which originated from Shoinzukuri architecture during the 15th century. Kumiko was also invented during this era and evolved during the Edo period. Hideo Yamakawa is a seasoned fixture carpenter who can craft over 200 types of complicated Kumiko patterns. Since entering the craft at the age of 16, Hideo Yamakawa has fulfilled the requests of homeowners who value Japanese tradition.

You started your career soon after you graduated junior high school? 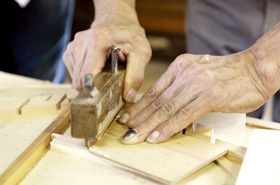 "I was born in Tochigi and started working at a carpentry in Asakusa after graduating school. Because my master's wife and I are from the same town, they invited me to live in their house and enter an apprenticeship. This carpentry that I trained at for eight years specialized in detailed work. I learned Kumiko from an expert who was my master's friend. After I learned how to make Kumiko, I practiced tirelessly on my days off from work. I started my own business as a fixture carpenter at the age of 25. Coinciding with the Tokyo Olympics, the economy was good and the more I worked, the more I earned."

The Japanese lifestyle changed significantly after the Tokyo Olympics.

"I wasn't influenced by lifestyle changes because I specialized in upscale Japanese crafts. My business flourished during the bubble economy because many farmers sold their land and built large mansions. I started noticing the changing times in the '90s. Around this time, large construction companies began producing systemized housing that reduced the cost of fixtures and, subsequently, the demand for fixture carpenters. Regardless, I somehow managed my business fairly well until the American financial crisis hurt my business. I joined the Edogawa Traditional Crafts Preservation Society last year in order to reinvigorate the entire industry." 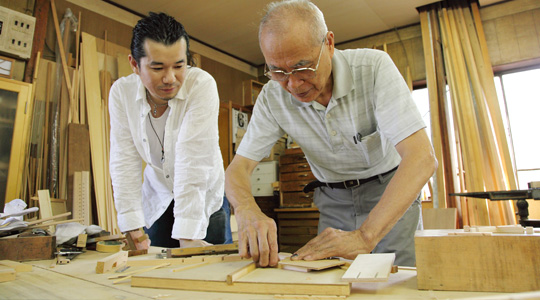 Please tell me the history of Kumiko fixtures.

"Kumiko was a decorative fixture used on Shoji and Fusuma, which are sliding paper doors and were often found in the main residence of nobilities' homes towards the end of the Heian period (12th century). When Shoinzukuri architecture was invented in the 15th century, these decorative fixtures developed greatly and were even used to decorate the Shoji frames. Kumiko woodcraft became the most iconic decorative fixture and is unique to Japanese architecture. Fixture carpenters exhibit their skills by crafting Kumiko. It takes at least ten years to become a professional."

How many Kumiko patterns are there?

"Approximately 200 patterns have been passed down through the generations, most of which were invented during the Edo period. The basic pattern is referred to as Hitoehishi, which joins four pieces of finely cut wood to craft a diamond shape. This is actually the most difficult step and a inexperienced crafter will not be able to get it perfectly straight. The pattern I use most is Asanoha (hemp leaves). The name of this pattern was derived by the similarity the shape of the overlapping hexagons shares with hemp leaves. Because hemp leaves grow straight and fast, the hemp leaf pattern is often used for baby clothes to wish the child grows well. Another ceremonial pattern I often use is called Gomagara Kikko, which uses hexagons to create a turtle shell appearance."

What types of wood do you use?

"I mainly use cypress from Kiso, Nagano. I sometimes use cedar from Akita and cypress leaves, but I think the small rings on cypress have a more sophisticated appearance and cypress is easier to craft. Wood actually has a front and a back. The front is smoother surface, which is why fixture carpenters will crafts items so that the front of the wood faces outwards. Craftsmen back in the days would write the Chinese character for heart on the front side of the board to avoid confusion and to express their passion for their work."

I heard that you carve patterns by a thousandth of a millimeter.

"Accuracy is crucial in Kumiko because it is crafted by joining wooden pieces without using any nails. The affect of a tiny mistake or wrong measurement grows as the Kumiko becomes more complicated and elaborate. Seasoned craftsmen scrape wood by the thousandth of a millimeter. Machines cannot do this delicate process. Craftsmen use their instinct to determine when to stop scraping the wood. This instinct can only be acquired through many years of training. Still, I don't like to work on a rainy day because wood is affected by the humidity. Winter is the best season because the air is dry and the Kumiko looks polished when I wipe the fixture with a damp cloth."

"One of my most popular crafts is the hemp patterned Kumiko drink coaster. I designed this product about 20 years ago to make Kumiko more accessible, and, nowadays, I see similar products sold throughout Japan. Even with these small items, the level of the craftsmanship is evident. Products made by unskilled craftsmen will become crooked and unstable after being used. I also make Japanese lamps made out of Kumiko woodwork. In response to the recent decline in Tatami rooms in Japanese residences, I have been researching how to incorporate Kumiko fixtures into Western-style rooms by using imported timber such as Chinese quince trees and walnut trees." 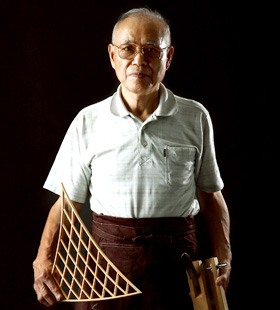 1954: Entered Apprenticeship at Kakui Carpentry in Asakusa at the Age of 16.
1964: Founded Yamaguchi Tategu in Edogawa City.
1977: Incorporated the Business and Name Changed to Yamaguchi Tategu, Y.K.
1994: Won the Tokyo Meister Prize for Dedicating His Career to Furthering Fixture Carpentry Skills and Traditional Crafts. 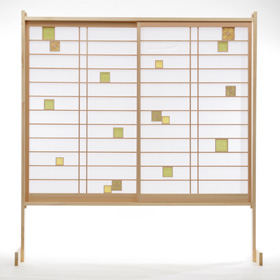 This unique work of art was crafted when Hideo Yamakawa joined the Edogawa Traditional Craft Academic-Industry-Public Project. Because Tatami rooms have become less common in the contemporary, Western-style residences, Hideo Yamakawa wanted to incorporate Kumiko into these contemporary homes. To do so, he collaborated with two art students (Mizuki Imanishi and Ayano Nonomiya from Joshibi University of Art and Design) to create stylish Kumiko woodworks that suit contemporary residences. The woodwork is designed for people to relax while gazing at the color and movements in the Kumiko. Visitors to the Academic-Industry-Public Project's new collection exhibition voted this craft as their favorite and Edogawa City recognized his masterpiece.