Rozashi (silk gauze embroidery) has a long, rich history that can be traced back to the Nara period (circa. 8th century) when Buddhism was introduced to Japan. This handcraft has been passed down for hundreds of years as a hobby for women in the aristocratic and noble class. Yasuko Watanabe wanted to transform the craft from a hobby into a tradition. She is bringing back the highly formal craft through embroidering Buddhist monk's stoles and creating a new style of Rozashi by embroidering 3D patterns. Seventy-nine years young, Yasuko Watanabe is full of life and enjoys challenging herself with new ideas.

What are the origins of Rozashi? 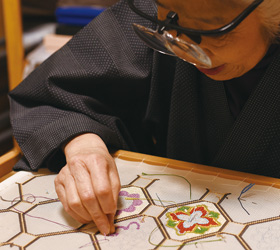 "Rozashi embroidery originally covered the stand that Buddhist sutra books were placed on. Japanese Shishu, which is another embroidery style, shares a similar origin. Japanese Shishu was a craft perfected and preserved by craftsmen, whereas Rozashi was a hobby amongst aristocrats that never gained widespread popularity. Twelve hundred years passed, and Rozashi was finally introduced to common folk during the Meiji period. Although I say "common folk", the majority of people could not afford Rozashi and it became a hobby for women in wealthy merchant families. There are people who take pride in the fact that this craft is rather unknown. But if this craft is nothing more than a hobby, it will disappear as soon as the person crafting the embroidery stops embroidering. I worked to get this craft recognized as a traditional, Tokyo craft and named it Edo Rozashi."

How have you spread recognition for this craft?

"I demonstrate embroidering the craft while providing explanations about the craft at special events held in Edogawa City Office and department stores. Because this craft is rather unknown, people won't recognize what it is if they simply see the finished craft. That's why it's best to provide explanations while embroidering. Upon seeing my demonstrations, some people take an interest and come to my home to learn how to craft Rozashi."

How did you get started with Rozashi?

"I knew that Rozashi existed, but there was no one to teach me how to embroider it. Deciding to dedicate my life to Japanese Shishu, I started embroidery when I was around 40 years old. I attend an exhibit at Kiyosumi Garden one day and spotted a Kakejiku (hanging scroll) depiction of Samantabhadra that was stitched with Rozashi. I immediately fell in love with Rozashi. I was so awe-inspired that it gave me goose bumps and I asked the artist to take me on as an apprentice." 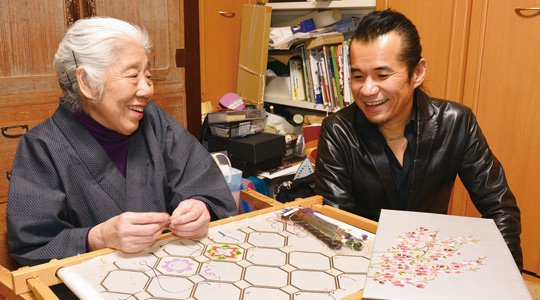 What is the difference between Japanese Shishu and Rozashi?

What is exceptionally unique about Rozashi?

"There are many holes in the silk gauze material. The needle must be passed vertically through the holes in the material, which limits the types of different stitches. There are only three different types of stitches, and when you want to stitch a horizontal line, you have to create the horizontal line by stitching it vertically. It's almost like drawing a dotted, mosaic painting on the computer. It's easy to count the threads and pass the needle through the holes. But when you finish the layer, it's surprising how different it appears from what you would have imagined. This makes it very difficult and you have to think carefully about each stitch. Getting into Rozashi is rather easy, but the more you get involved, the more interesting and challenging it becomes."

Is it better to be able to create both Japanese Shishu and Rozashi?

"Small Rozashi patterns can be glued onto Kimono. But certain patterns such as the string of a Hyotan (gourd) are so narrow that it cannot be applied to the Kimono. These narrow patterns can be touched up, however, with Japanese Shishu. Although I could ask a different craftsman to do this, I prefer being able to do it on my own so I can create it craft in my own image."

I heard that you participated in Edogawa City's industry, academia, and public sector project and collaborated with a university art student.

"Working with students was an amazing experience because they suggest new ideas for Rozashi patterns that I would have never been able to think of on my own. The student suggested I embroider the scenic view out of a train window and that I could stitch multiple patterns into the same embroidery without making it overwhelming. The student also suggested that embroidering colored lines into an inversed 'e' on its side would depict the golden ratio. Embroidering color is difficult, but listening to the student, there were many wonderful ideas that I could agree with. These girls were studying so much and listening to them talk was very enjoyable."

What are you working on right now?

"Buddhist monk's stoles used to be Rozashi, but not any more. After years of looking, I finally found one in storage at a museum in France. I am currently embroidering a stole to gift to the second-generation monk at my family's Bodaiji Temple. I am trying to embroider a highly formal stole with Shokko (latticed rectangle pattern) and Hosoge (arabesque flower patterns) that is ideal for the rather young monk that he is."

So you are trying to create something new?

"For the past few years, I have been trying to find a new way to express myself and am looking into lifting just the front side of the silk gauze to embroider a three-dimensional Rozashi. Standard threading will lift both sides of the silk gauze, so I am attempting to lift just one side of the material so that it doesn't appear bulky when framed or hung. It's a trial and error process to craft the three-dimensional pattern. Over the years, I've tried my best to spread Rozashi and how interesting a craft it is. I am very grateful that I have a successor who will be ready to expand the craft." 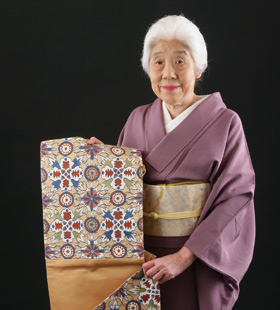 Born in Tokyo in 1937. Began Japanese Shishu at the age of 40 and learned Rozashi at the age of 69. She has won numerous awards since being selected by the National Traditional Crafts Exhibit in '09.