Yukata was originally a fabric used to wipe off your body after a bath and became a fashionable clothing item towards the end of Edo period. When a law during the Edo period prohibited people from using silk or colored thread, owners of businesses invested in craftsmen who designed stylish garments made of navy cotton fabric. Eiichi Takahashi owns approximately 30,000 Yukata patterns that were designed during the Edo and Meiji period. Using modern dyeing technique, he reproduces these traditional Yukata for an affordable price in order to keep the Edo spirit alive and thriving.

That is an outstanding number of patterns. 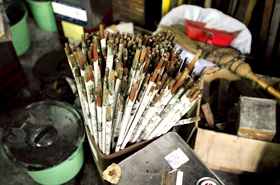 "My father collected Yukata patterns from bankrupt dye factories and from people who kept them in storage. I don't know the exact number of patterns, but I think we have over 30,000 patterns. Most of them were crafted towards the end of the Edo period to the beginning of the Meiji period. The size of our collection is even rare for Ise, which is city in Mie Prefecture that is renowned for being Japan's largest Yukata pattern producer. Pattern producing craftsmen from Ise occasionally visit our workshop to see our collection."

What is appealing about these old patterns?

"The finest artists and crafters used to make these patterns during their free time, and the patterns are beautiful and delicate. Take a picture of a cherry blossom, for instance. While modern people would repeatedly draw the same shaped petal over and over, artists from back in the day would draw each unique shape of all the different petals. Modern craftsmen struggle to reproduce the delicate details within these old patterns. Even if they did imitate the attention to detail, it would cost several hundred thousand yen to craft a single Yukata pattern. Through years of research, my father has successfully innovated a method to reprint these beautiful, traditional Yukata for a fraction of the cost."

Are these considered Edo Yukata?

"Yes. The majority of Yukata on the market, however, either uses cheap patterns or a single pattern to mass-produce cheap Yukata. On the other hand, our Edo Yukata are reprints of original, old patterns that are crafted by copying the original and spreading adhesive over a silk screen to prevent dye from spreading. Although it takes longer than mass-production techniques, our method retains the delicate patterns and appears as though both sides of the Yukata were dyed. You will not find the white lining found on cheap Yukata." 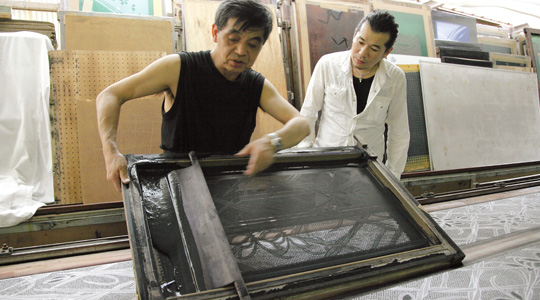 I heard that your revenues are increasing every year.

"Our Edo Yukata are sold for approximately 50,000 yen. Even though these are not inexpensive clothing items, we sold out of all our Edo Yukata this season. Many younger people seem to be happy paying nearly twice as much for our traditional Yukata than the cheap Yukata. It seems that they were originally wearing cheap Yukata but became fascinated by the elegance of people wearing traditional Yukata at fireworks festival. Are buying their own, they buy a second or third Edo Yukata as a gift to their spouse and parents."

The meaning behind each traditional print is very fascinating.

"Edo Yukata is popular amongst men because most patterns have a cultured design. For instance, a carp swimming up a waterfall represents success. It's a nice way to start a conversation with a lady. Explain to her that the carp is swimming against the tide will one day transform into a dragon."

Are there any other items you dye aside from Edo Yukata?

"While most dyers have a field that they specialize in, I dye everything. Half of our revenue is from companies and organizations that order special Yukata for festivals, Yukata with logos, and hand towels, etc. Since I took over my family business, I have focused on being able to craft smaller orders and delivering the products in a timely manner. Although I cannot mass-produce Edo Yukata, I fulfill all my orders within three to four weeks no matter how busy I am."

How do you sell your Yukata?

"I once visited a famous potter. This potter crafted for merely three months and spent the rest of the year selling the pottery and hosting tours at his workshop. This is my ideal work style. That's why I clearly tell my clients that they don't need to sell a large number of my products nor do they even need to buy their Yukata from me. I absolutely disdain retailers selling my Yukata, which I spent so much time and effort on, at a discount simply because they are overstocked. Doing so lowers the value of Edo Yukata."

Why don't you raise the price?

"I've considered it. But talking to department stores and specialized retailers, I've learned that cotton has a certain market value. To sell my Yukata for a hundred or two hundred thousand yen, I would have to use silk. This would raise my costs of raw materials and it would overall be more difficult to sell the product. Looking back on Yukata's history, it was originally a product meant for the general public. I would like to honor this history by selling traditional, Edo Yukata that can be worn casually and are within purchasing power of most people." 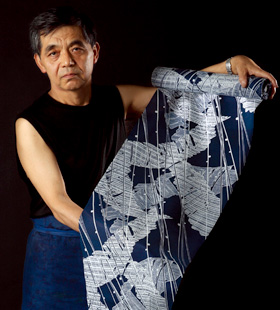 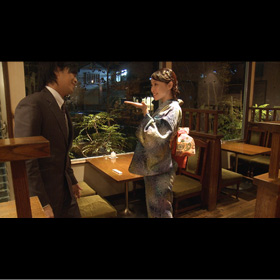