The clear sound of Furin (wind chimes) brings a sense of refreshing coolness to people during the heat of summer. Shinohara Furin Honpo is a long-established glass Furin shop that preserves the Edo period's crafting traditions. Instead of stubbornly adhering to tradition, Yukari Shinohara collaborates with companies and incorporates current trends into her Furin. Incorporating modern styles is similar to how craftsmen from the Edo period were trend conscientious. Today, I am interviewing Yukari Shinohara, who has brought a refreshing breeze into the traditional world through her youthful taste.

I hear that you collaborate with different industries. 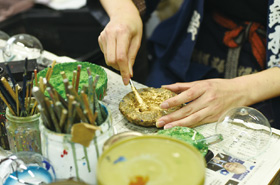 "That's correct. I am currently working on many unique projects. People who like traditional Furin really like our Furin crafted in collaboration with Edo Kiriko glassware. Our collaboration with Tsuburaya Production to create the Ultra Man Furin was originally their idea. Multiple media outlets featured this collaboration, which reached many people who were not familiar our traditional craft."

What is expected from you during collaborations?

"Each collaborator has unique requests, but they all ask for originality. I have to be creative to fulfill this request."

What kind of creative things have you done?

"I incorporated ideas that Ultra Man fans would appreciate, such as portraying Ultra Man's body on the paper strips that hang off the wind chime. The most difficult character was Pigmon. Being a very popular character, I thought long and hard about how to portray the character's distinct prickly needles in my Furin." 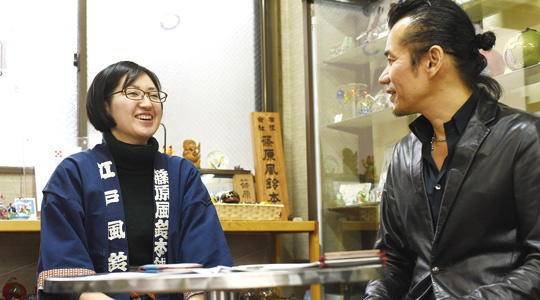 Your designs are unconventional.

"I love rock music, and sometimes express my hobbies by crafting Furin with skulls on them. I once had a young man visit me to buy a Furin to give to his DJ friend. I believe that design of the Furin will influence people's desire to purchase items, which is why I will continue emphasizing the design aspect of Furin."

Did you want to become a craftsman when you were a child?

"When I was a kid, I helped my parents at all times of the day and became envious of nine to five jobs. After graduating university, however, I took over the family business."

Does it feel different to craft Furin as a full-time job?

Which Furin is the best expression of you?

"My "TOKYO" Furin portrays Tokyo's cityscape through paintings that resembled paper cutouts. It was one of the most well received Furin I ever crafted and it won the Encouragement Award at Tokyo's Traditional Crafts Challenge Contest. This series of Furin are perfect for young adults, seniors, and all ages in between."

Where are your crafts available for purchase?

"Most people purchase my crafts at department store exhibits and online through Edo Core . I feel like many people these days are willing to spend a little more for high quality items."

Do you promote your craft internationally?

"Some of our Furin are sold at airports, and I have recently been receiving emails from international retailors who are interested in purchasing our Furin. I want to promote our craft internationally, but there multiple challenges we must overcome to be successful internationally."

What are your goals for the future?

I recently began to understand the fascinating power that Furin has to bring a sense of refreshing coolness through its mere appearance and sound. I am collaborating with Edo Kiriko glassware craftsmen to maximize this potential. While utilizing traditional techniques, such as carving goldfish patterns into the Furin, I am seeking new ways to express myself. In the future, I would like to focus on crafting authentic, traditional Furin that emanate Edo's unique characteristics. 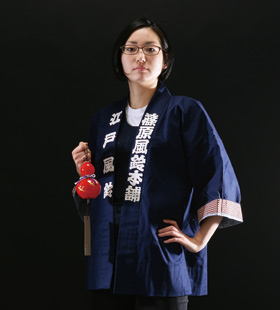 Born in Tokyo in 1981. After graduating university, she became an apprentice to her father, Yutaka Shinohara. Highly acclaimed for her sophisticated design, her TOKYO Furin won the Encouragement Award at Tokyo's Traditional Crafts Challenge Contest in '11. She received the Board of Education Prize at the 30th Edogawa City Traditional Craft Exhibition in '13. She is expected to be a successful craftsman.