Every season, a traditional crafts exhibit is held at department stores all over Japan. A man who dedicated his life to preserving traditional crafts founded this exhibit. This man, Yoshiharu Shinohara, is the current chairperson of Shinohara Furin Honpo, which was established in 1915. Surviving through the turbulent times during and following WWII, Yoshiharu Shinohara truly understands the importance of "showing" and "selling". He is dedicated to preserving Edo's traditions while incorporating new techniques. Craftsmen who will lead the next generation learn from his unwavering, passion for his craft.

When did you start making Furin? 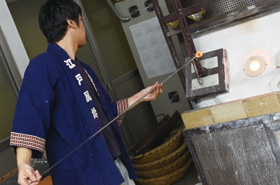 "Shinohara Furin Honpo was founded in 1915 and I am the fourth successor to this business. A samurai, Mr. Sakurai, who was in the direct service of the Tokugawa shogunate, originally founded the business. The business was then passed down to Dekomatsu and then to Mr. Sakai, who was the owner of Sakai Glassware. My father, Matahei Shinohara, was an apprentice to Mr. Sakai and became the first Shinohara to carry on the business."

Please tell me the history of Furin.

"The roots of Furin can be traced back to ancient China when people hung balls on bamboo trees to read their fortune, which was dependent on the direction of the wind and sound of the bell. Dotaku (bronze bells), which were used in Buddhism were introduced to Japan, evolved into Futaku (bronze wind chimes) and spread throughout Japan. Futaku eventually became Furin glass wind chimes, which was coined by Honen Jonin, a Buddhist monk from the 12th century. Furin evolved like this because of Japan's distinct culture of sounds. Dotaku and Futaku made sounds that were believed to ward off evil spirits. This is one of the reasons why Poppen (glass flutes) and Furin became popular during the Edo period."

"I once checked the price of Furin during the Edo period when they were most popular. At the time, one Furin cost five Ryo, which is an outdated Japanese currency, but people comfortably lived off of three Ryo per year. By my estimates, that's equivalent to approximately three million Japanese yen. Craftsmen began decorating their Furin with pictures, such as goldfish, during the Edo period. Camellia flower patterns followed the goldfish patterns. It is believed that pictures of white camellia falling to the ground gracefully at full bloom was intended to remind samurai that they must also die as gracefully as a camellia flower. My "Edo Furin Camellia", which was recognized by the Ministry of Economy, Trade, and Industry as one of the best local products to promote internationally (The Wonder 500), was based on this old, traditional pattern. 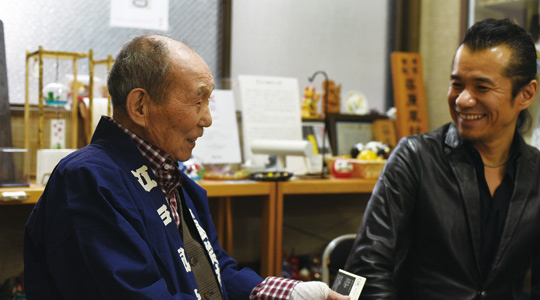 Were Furin always round?

"It was from my generation that we crafted Furin in many different sizes. At one point, I made triangular and square Furin, just to rebel from the conventional idea that Furin must be round. I have to admit, though, that these Furin didn't sound very nice."

Some of your Furin have incorporated modern trends.

"From my grandchildren's generation, we started collaborating with Tsuburaya Productions to make Ultra Man Furin and soccer ball Furin, which were extremely popular during the World Cup. Incorporating modern trends is one of the reasons why we have been able to grow our business."

Have you always been innovative?

What inspired you to organize a Traditional Crafts Exhibit?

What do you think must be done to pass the tradition down to the next generation?

"I think it's important to inspire children by letting them know what it's like to be a craftsman. When I was ten years old, I watched Tarzan at the movie theater. Seeing the practically naked characters in the jungle, I thought I would become a millionaire by making and selling shirts and pants. I doubt that elementary school children these days have opportunities to dream like I did. I believe it's vital for kids to see where craftsmen work and engage them with hands-on experiences."

What does Furin mean to you?

"For me, Furin is an important item that makes me dream bigger. My job is worth everything to me." 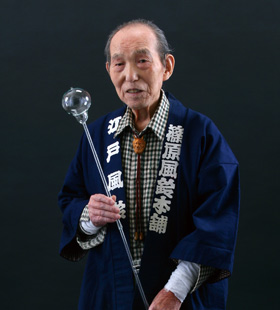 Yoshiharu Shinohara/ Born in Tokyo in 1924. Apprentice to his father Matahei in '37. Designated a Certified Owner of Edogawa City's Intangible Cultural Property in '82. In 2004, he also became Edogawa City's first craftsman to be certified as an honorary Tokyo resident. He has received many prizes, including the Governor's Award Winner at Tokyo Skilled Technicians (Tokyo Miester) and the Ministry of Education, Culture, Sports, Science and Technology Award.