Nihon Ningyo, which is a Japanese doll, typically refers to Ichimatsu dolls and dolls with traditional Japanese hairdos and Kimono. Ayako Niikura is a professional Japanese doll teacher who makes one Sosaku Ningyo (original doll) for herself every year. Her dolls range from a woman dancing in a festival to a girl playing an electric guitar. She utilizes her Nihon Ningyo skills to craft a wide range of themes.

Please tell me the history of Japanese dolls. 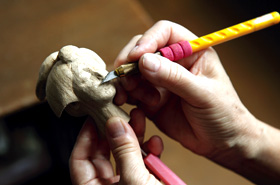 "While there are many types of Nihon Ningyo (Japanese dolls), most dolls portray town girls, geisha, and samurai daughters in vibrant Japanese clothing. It was not until recently that the dolls were crafted as an art to be on display. Originally, the dolls were known as Hitogata, which literally means human shape, and these dolls were used to replace human sacrifice during rituals. During the Edo period, dolls were given to samurai daughters as a bridal gift, in hope that the doll would absorb the bad luck that was cast upon the girl. The artistic value of Nihon Ningyo has recently grown as Japan's quality of life has improved. The dolls are now given as toys for children to play with or are on display.

What is the difference between Nihon Ningyo and Sosaku Ningyo?

"I belong to the Edogawa City Traditional Craft Promotional Association because I'm good at making Nihon Ningyo. Sozaku Ningyo, however, does not need to be limited to the traditional techniques and styles of Nihon Ningyo. Therefore, artists can express their originality and ingenuity in any way they want and can even make Westernized dolls. There are many types of dolls on display at dolls exhibitions, and can range from European styled dolls to contemporary art dolls. The crafting process between Nihon Ningyo (Japanese dolls) and Sosaku Ningyo (original dolls) differs greatly. Traditional Nihon Ningyo used for Japan's Boys Festival in May or Girls Festival in March are crafted by cooperation between craftsmen who each specialize in making the face, expressions, and body. Artists crafting Sosaku Ningyo, on the other hand, are in charge of all aspects of making the doll, which ranges from deciding and designing the theme, poses, and costume. It takes at least 10 years to become an expert because there are so many details to learn and remember." 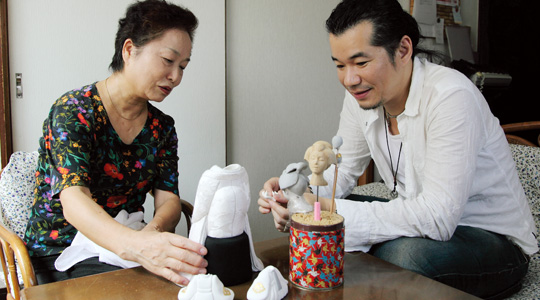 What got you into making Nihon Ningyo?

"Porcelain French dolls were introduced to Japan when I was in high school and became immensely popular. I gradually became interested in doll making after I purchased a French doll making kit from a store near Asakusa Bridge. After graduating high school, I took a correspondence course to learn about doll making. Aspiring to become a professional doll maker, I then enrolled in a vocational school for doll making in Yoyogi. I became an apprentice to Jiro Hasebe after gradating and I started making my own Sosaku Ningyo after he retired. I was thirty when I was certified as a professional by the Art Doll Foundation."

Please teach me the process of doll making.

"First, I decide on what I want to create in what scene. I get my inspirations everywhere. It may be classic literature such as the Tales of Genji or my granddaughter practicing ballet. After deciding what I want to make, I make the original mold out of an oil-based clay. It takes a lot of time to decide the shape of the original mold. I then use sectioned paper to trace the shape into the wood to begin the carving process. Once the shape is decided, I can carve the body in about a month, if I focus only on this carving process. I start working on the head after completing the body. I then smoothen the body and paint it three times. I also draw each individual strand of hair by hand. Making the head requires a lot of patience and dedication. The doll is completed when I put on its kimono. I usually use antique kimonos but I sometimes dye my own silk when I can't find anything that fits my vision."

What is the appeal of Sosaku Ningyo?

"Aside from joy of creating new things, I most enjoy being able to create my own story. If I were to make a doll based on a character in the Tale of Genji, I can choose which scene to depict and the doll's expression, pose, and emotion. To some extent, Sosaku Ningyo is similar to capturing a scene from a movie. While I am currently busy with teaching and have not been able to hold exhibits, I would like to teach the beauty of Japanese dolls to the younger Japanese generation and people from around the world through my works of art." 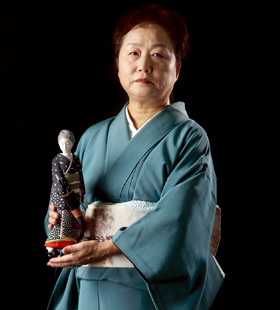 Ayako Niikura's Masterpiece "After the Rain" 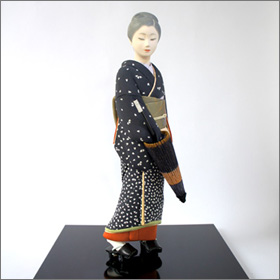 This depicts the moment when the rain stops during the cherry blossom season. The doll is wearing Shoken Komon (pure silk pattern) cloth.