The history of Sensu (folding fans) can be traced back to the Heian period (794~1185 A.D.). Although Sensu are commonly used to fan cool air, it was originally used to signify the social status amongst nobility. Because it was a status symbol amongst the nobility, Sensu were first crafted in Kyoto, which was Japan's imperial capital. Tokyo, however, also developed its own traditional Sensu. Determined to preserve the craft his family has inherited for generations, Hiroshi Matsui and his son craft Edo Sensu. They also incorporate contemporary styles into orders from fashion designers and younger customers and collaborate with young artists.

I heard you were an office employee before joining this craft. 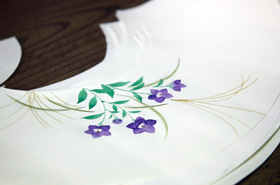 "My father was a Sensu craftsman and he often asked our entire family for help. I was not particularly fond of the work so I joined a company in 1968. After working there for three years, I realized that office work did not suit me. Office workers need to commute and are bounded by people and time constraints. Ultimately, I decided to leave the company and help our family business. The First Oil Crisis in 1973, however, drastically reduced the demand for Sensu and I was forced to go back to work as an office employee. I led a dual lifestyle as an office employee during the day and a Sensu craftsman late into the night."

Yet, you decided to inherit your family business?

"To be honest, I wasn't sure about my decision for ten years. I had doubts as to whether or not I could earn a living by crafting Sensu. Many other Sensu craftsmen were either retiring or passing away, however, and I felt that it was a shame to allow the Sensu tradition to perish. After the Oil Crisis, I attempted to push sales of our Sensu by visiting retailers, but I couldn't get a foot in the door. I would say that only one out of every hundred retailers would pay attention to what I had to say. It was really humiliating. After that experience, I decided to focus on my craft and patiently wait for people to gain an interest in our Sensu."

What is the difference between Kyoto Sensu and Edo Sensu?

"Being a long-established producer of Sensu, each individual process involved in crafting Kyoto's Sensu is handled by professionals specializing in each process. Edo Sensu, on the other hand, are crafted by a single craftsman who crafts everything from the Hiraji (paper pasted on the fan) to the adding the final touches. With exception to crafting the fan bone and painting, I also undertake all the different process. The appearance of Kyo Sensu and Edo Sensu also differ. Kyo Sensu has many blades, narrower creases, and feels more delicate. Edo Sensu, on the other hand, have fewer blades, larger creases, and feels more masculine. Perhaps Edo's patriarchal feudal culture influenced the look of Edo Sensu, which appears simpler and more chic than Kyo Sensu."

How long does it take to complete one Sensu?

"Once when I was demonstrating and selling my crafts at a department store, a customer casually said, 'Make my Sensu by the time I'm done shopping." She probably assumed it was easy to craft a Sensu because it only uses bamboo and Washi (Japanese paper). In reality, it takes at least four days to craft a Sensu. You can categorize the processes into the following four steps: fold the Washi, dry it, strain it, and apply it on the fan bone. But that is an oversimplification and there are actually thirty processes. Because we use natural materials, the craft is also affected by the humidity in the air and it is difficult to determine the correct focal step during each season. If I mistakenly select the wrong step, the Washi and fan bones will not merge together properly, which makes the Sensu look unaligned when folded."

Recently there are many cheap Sensu in the market.

"Most of them are made in China and these cheap fans start to fold unevenly after using it a few times. Sensu made by Japanese craftsmen, on the other hand, fold perfectly with a nice, sharp sound. Some of my customers have been using our Sensu for more than 10 to 15 years. "

I understand that there are many types of Sensu.

Sensu are not only used to fan cool air?

"It is believed that Sensu originated from Hiogi, which was used to signify the social status of nobility during the Heian period. Hiogi were actually a development of the Mokkan, which was a piece of wood that people used to take notes with. The fans evolved over time into its current shape."

Is this the reason why it is commonly said that you can judge a person by their Sensu?

"Sensu and Japanese are inseparable. When babies are born, their parents take them to visit a shrine when the baby is about a month old to pray for the baby's health and happiness. As part of this ritual, parents dedicate a Sensu to Ubusunagami, which is the local region's god. The same goes for Shichigosan, which is a Shinto ritual where parents take their children at the age of three, five, and seven. Ceremonial Sensu are used at a young adult's Coming of Age Ceremony and also in Japanese weddings. These are also used when celebrating your 60th and 70th birthday. When someone passes away, a Sensu is put inside his or her coffin. In short, Sensu is used for important events throughout your entire life. I believe that the younger generation would learn to truly appreciate Sensu if they knew just how significant Sensu is to Japan." 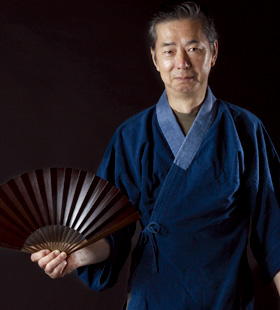 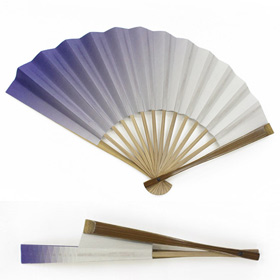 This Sensu especially stands out when folded, showing its print and gradation. With one side shorter than the other, this Sensu easily fans cool air.
This highly acclaimed Sensu is a collaboration between Hiroshi Matsui, who crafts stylish Edo Sensu that differ from Kyo Sensu, and Akiko Matsumoto, an art student at Tokyo Zokei University who is known for her refreshing taste in design.