Most people may not be familiar with the word Kazari Kanagu, which means decorative metal fixture. When told, however, that Kazari Kanagu are the golden decorations used on temples or portable shrines, people will realize they are familiar with this craft. The Kazari Kanagu craft has a long history and even decorates Japan's oldest wooden building, Horyu-ji Temple. Teiichi Ichinotani's father, who was a lacquerer, recommended he learn this craft. Although decorating shrines and temples is a strenuous, lonely process, Teiichi Ichinotani has a vibrant personality that emanates Edo's unique culture, which he inherited from his parents. 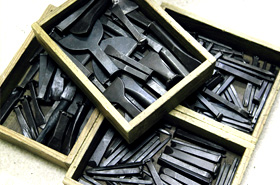 "Kazari Kanagu generally refers to the decorative metal fixtures used on religious constructs, such as shrines and temples, as well as portable shrines and Japanese wardrobes. I believe that Kazari Kanagu originated from the use of nails. Until metal was introduced to Japan, traditional architecture in Japan was built without nails. Once people began using nails to improve the strength of the building, decorative metal fixtures were designed and crafted to cover the nails. I also find it interesting that brass fixtures are used on portable shrines and copper fixtures are used on religious architecture."

What kind of metal fixtures do you make?

"Each craftsman has his or her own unique specialty. Personally, I specialize in temple and shrine architecture. I am currently mending the fixtures at Hanazono Shrine in Shinjuku. These copper decorations were attached to the doors at the shrine but, over the years, have been damaged by wind and rain. After another professional cleansed the metal, I mended the cracks and distorted fixture. On top of repairing fixtures, I also craft Buddhist altars and items used for religious rituals."

Why did you take up this craft?

"My father was a lacquerer for Buddhist altars. Because I was the eldest son in the family, I expected to inherit my father's craft after graduating high school. Contrary to my expectations, my father told me I should craft decorative metal fixtures. His reason was that lacquerers and fixture crafters would be good business partners and one of his acquaintances was looking to hire a young person. Perhaps my father thought that I could learn more by working at in a different field, or maybe he did not foresee a bright future for me as a lacquerer. Regardless of the reason my father pushed me to enter this craft, I was trained for nine years by a master craftsman in Ryogoku before I started my own business."

How were you trained?

"Before being officially welcomed as an apprentice, I worked part-time for my master. After working for him for a week, I came down with a high fever. I think I was physically exhausted because the craft requires us to sit all day long. It goes without saying that my master did not immediately assign me a proper crafting job. Rather, I started by chiseling on scrap metal. Once I got used to chiseling, I was trained to carve Karakusa (foliage) patterns and other patterns with thin lines. Although the craftsmen in our trade carve similar, traditional patterns, each craftsman has his or her unique stroke styling. Even the strokes I learned from my master differ from his. Being able to carve elegant lines is an absolute must in this craft." 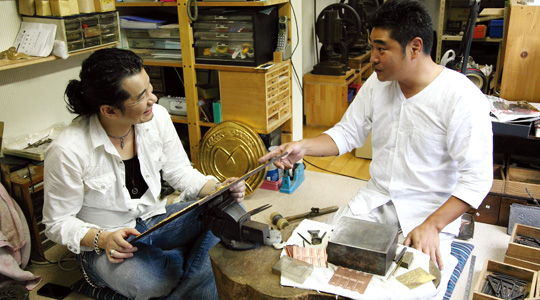 Why do you have so many chisels?

"You may think that my 800 chisels is a lot, but craftsmen who have been in this trade for generations have two to three thousand chisels. Crafting the decorative metal fixtures requires chiseling and we use different chisels depending on the pattern. Some of the major carving techniques are Jibori, Sukashibori, Kebori, and Nikubori. Jibori involves carving thick sheets of metal to raise the pattern. The Sukashibori technique either chisels or cuts out pieces of the metal with a fine saw. Kebori uses a narrow tipped chisel to carve narrow lines to make Karakusa (foliage) and Shishi (lion) patterns. Placing a metallic mold on pinewood and carving around the mold is the Nikubori technique. The type of chisel we use depends entirely on the technique and size of the pattern."

The number of craftsmen making decorative metal fixture are declining in Japan.

"I suppose there are about 8 or 9 left in Tokyo. Considering that at least four of these craftsmen are over 75 years old and have no apprentices to inherit their craft, we expect the number of craftsmen to decline. I also know that my eldest son, who is the youngest of my three children, will not follow in my footsteps unless he finds the work appealing. It was quite common for craftsmen from my father's generation to be poor despite being overwhelmed with work. If I undercharge for my work, however, I won't be able to send my children to university or expect them follow in my footsteps. Our craft is only a part of the entire architecture and we would not exist without carpenters, wood carvers, gilders, and other craftsmen in different professions. Fortunately, I've been able to work on big projects along with passionate professionals who are around my age. Our horizontal relationships across multiple professions will increase the value of our individual crafts and preserve Japan's traditional craftsmanship." 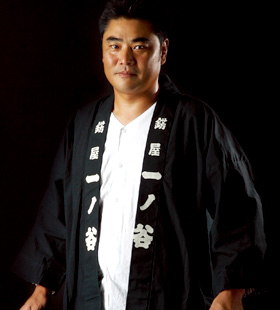 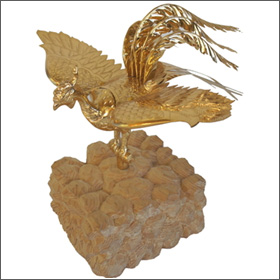 This is a miniature sculpture of Fenghuang, a mythology bird in East Asia that often decorates the top of portable shrines. Using his perfected skills, his Fenghuang appears extremely realistic.