With Bizen, Arita, Seto, Kutani, Hagi, and many other famous kilns in Japan, it is challenging for potters to promote their newly established brand. Potters have the choice of competing with other kilns in famous pottery regions or attempt to establish his or her own brand in a lesser-known region. Nobuhiro Hayashi created Kouwa-yaki, which is a brand of household dishware made in Koiwa. Born and raised in Koiwa, Nobuhiro Hayashi uses clay from his hometown to introduce the joy of crafting and using pottery.

I thought from the name of the region that your pottery would be Koiwa-yaki. But it's actually Kouwa-yaki? 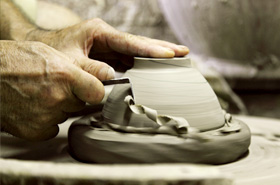 Why did you take up this craft?

"Since I was a child, I was fascinated by plants and insects, so I initially enrolled in the Department of Landscape Architecture in university. One day I was watching TV and Shoji Hamada, a Living National Treasure, was turning the potter's wheel. I was greatly inspired to try it out myself. Not knowing where to start, I bought a book about pottery from a used bookshop in Kanda, which was written in the early 20th century. When I first started, I used clay from my own backyard that I had discovered when digging a hole for compost."

So you have been using Koiwa clay since you first started pottery.

"Yes. I didn't have extra money so I started by using what I already had. I made a potter's wheel using a motor from an old washing machine and even built the kiln on my own. In fact, I still use both of these items today."

Were you confident about your work from the beginning?

"Of course not. It took me over 10 years to craft items into the shape I wanted to craft. You could barely call my earlier works pottery, but I was entirely fascinated by how clay transformed when it was baked. I ended up dropping out of university and worked at store making Bento (Japanese-style lunchboxes) from 5 o'clock in the morning to support myself as I learned the craft." 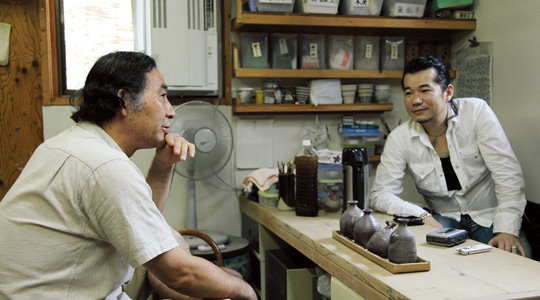 Did you ever think of quitting?

"I never thought of quitting but I struggled from the challenges I set forth for myself. My wife told me that I often grinded by teeth while I was asleep and even angry yelled, 'One day you'll see!'"

What was your turning point?

"After practicing for over 10 years, I was finally able to craft sellable dishes so I renovated a part of my house and turned it into a shop. Soon, people started asking me to teach them pottery. I became comfortable with my career choice when my students told me they enjoyed using the pottery they made on their own. It was in this moment that I realized the positive effect that pottery can have on people."

How would you describe the characteristics of Koiwa clay?

"Clay from the Kanto region, including Koiwa, turns into a brownish color when baked due because of the high iron content. While the color is similar to Bizen-yaki from Okayama Prefecture, I find it fascinating that the color tones differ slightly each time I bake. "

Did pottery exist in Edo?

But you still use clay from Koiwa?

"Yes, I will always incorporate Koiwa clay in my pottery. No matter how difficult it may be to use Koiwa clay, I treasure this clay because my career started there. Because Koiwa clay will only produce brown pottery, I use clays from other regions in order to give the dishes color. "

As the founder of Kouwa-yaki, what would you like to do in the future?

"I want to continue making household dishes that people can use in their daily lifestyles. If a ceramic artist visited my shop, he may tell me that I should focus on fewer items. When talking and observing my customers, however, I can't help but imagine all the various possibilities for ceramics. I want everyone to experience the joy of using ceramics that they truly love."

As a rule of thumb, businesses that continue for three generations will become part of a tradition.

"I don't have such high ambitions, but my daughter did quit her job two years ago to come work with me. Before she quit her job, she practiced using the potter's wheel for one year in the evenings after work. Because I did not have a master to train me, I wanted her to learn in a similar way. So I merely instructed her to try crafting and learn from her mistakes. Through this process, she acquired a range of techniques, and I currently sell her crafts in my shop. I find it interesting to see her work because she was a unique perspective that differs from mine." 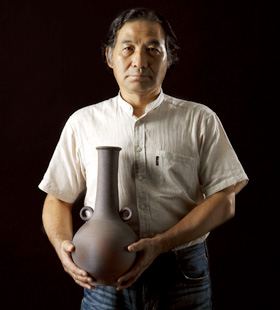 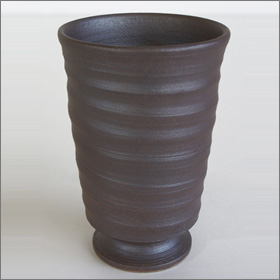 The quality of the Kanto region's clay is not ideal for pottery. Although Mashiko-yaki and Kasama-yaki are the region's only renowned pottery, their clay is dug out of Mt. Tsukuba. Tokyo has especially not been able to establish a traditional ceramic culture because it lacks fire-resistant clay. Nobuhiro Hayashi, however, has founded Kouwa-yaki and uses clay taken from Koiwa in Edogawa City. The clay is high in iron content, which is why this special beer mug is brown. The mug is appreciated for its ability to produce delicate, delicious foam. His works include beer mugs decorated with ashes of Keyaki trees and beer mugs imprinted with clamshells.