Tsurishinobu is an ornamental plant crafted from Shinobu, which is a type of fern. Moss is wrapped around a bamboo stick and layered with Shinobu. Hanging the Tsurishinobu under the roof is reminiscent of a wind chime and instills the same refreshing sensation during a hot summer day. Tsurishinobu is an ecological product that is made using ancient wisdom.
Terumasa Fukano is the second-generation owner of Yorozuen, which is the only Tsurishinobu workshop in Tokyo. Terumasa Fukano, his wife, and son pour their heart and soul into making authentic Tsurishinobu.

Tsurishinobu comes in many shapes. 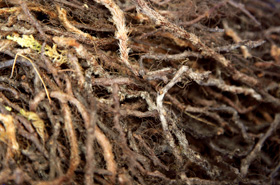 "The beauty of Tsurishinobu is that it can be appreciated for its shapes, as well as its greenery. At our workshop, we craft 15 varieties of large and small Tsurishinobu. Traditional ones can be shaped like a sharp sign, traditional Japanese lanterns, hazy full moons, or globes. In addition to these traditional shapes, I also make wells, gold fish, and animal symbols out of Chinese characters. Wrapping bamboo sticks or charcoal with moss and tying them with wires makes these complicated shapes."

"It is believed that a gardener from the Edo period made the first Tsurishinobu as a decoration for his own garden. He later gave his decorations to owners of large estates as a midsummer gift—likely hoping that people would recognize his work of art. By the end of the Edo period, Tsurishinobu became a popular decoration that was appreciated by non-nobility in the summer. Although it originated in Tokyo, Tsurishinobu is now sold in gardening markets and department stores throughout Japan."

Recently, there are very cheap Shinobu made of moss balls on the market.

"It is not particularly difficult to grow Shinobu (fern) on top of a moss ball. What is difficult though, is to mold the moss in a way that it won't lose its shape, no matter how complex the shape is. This requires special skills. In order to make fresh, green Tsurishinobu, I carefully scrutinize the quality of the fern and moss. I also pay attention to important details, such as the kind of wire I use to bind the Tsurishinobu as well as the direction and number of ferns I use. While most people believe that Shinobu only last for one season, our Tsurishinobu will last up to five years with proper care. Considering that the fern was named Shinobu, which means to endure, because the plant would survive the harsh winter and sprout again in the spring, they really should last longer than one season."

Where do you find the materials?

"Unfortunately, fern and moss cannot be cultivated. I, therefore, go to the mountains to pick them up, or ask coal manufacturers and hunters who live in the mountain to pick them on my behalf. This is extremely strenuous physical labor. Ferns grow on the surface of rocks and tree bark where morning and night mist condensates and drizzles down. It is extremely difficult to reach areas deep in the mountain where ferns grow. Finding mosses is even harder because it almost depends entirely on luck. I go into the mountain in midwinter to avoid poisonous snakes on my search of the mountains. When my father was doing this, there were many people who would cooperate and help. Most of these people, however, have grown old or work at town office. Some people say that I make easy money because I can get ferns and mosses for free in the mountain, but considering how difficult it is to collect the raw materials; I wish I could buy them."

"First, I cut bamboo, charcoal, or cedar into the appropriate size and gently wrap them with moss. I then place fern roots on top of the moss. Using copper wire, I bind the materials into a shape I like, such as a sharp sign or lantern. I then add a handle made of palm rope and balance the Tsurishinobu. After this, I hang it on a harvest rack inside a greenhouse during the spring, and transfer it to a harvest rack behind a reed blind when the weather gets warmer so that the leaves grow. While I can make about 20 Tsurishinobu molds a day, it requires tremendous time and effort to find and harvest the raw materials. My father would often say that slow but steady is the best way to go. I used to make about 10,000 every year, but I now make about 3,500 every year due to the lack of materials." 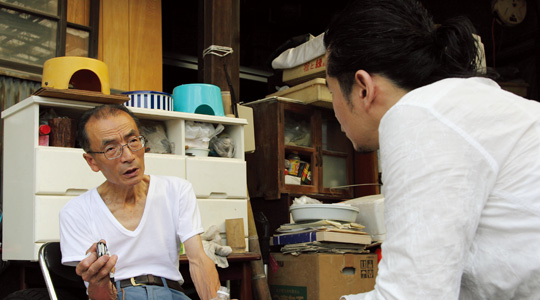 What is the secret to enjoy Tsurishinobu for a long time?

Your son has followed your footsteps.

"When I was hospitalized for stomach cancer eight years ago, my son suddenly quit his job. He didn't make it clear to me whether or not he intended to take up the family craft, but I decided to not bug him about it and let him be. I was hospitalized right before a major plant fair. By rule of the plant fair, the craftsmen will lose his or her right to open a booth if they fail to do so in the current year. Thinking that I had lost my spot for the following year and feeling disappointed, I walked into the fair and was surprised to find my booth. Curiously looking into the booth, I found my son. I asked him 'Where on earth did you learn how to build a booth?' He replied, 'I learned by watching you.' My son now makes about one third of our Tsurishinobu." 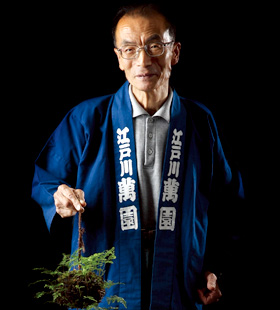 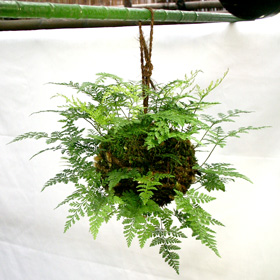 The most conventional Tsurishinobu shape is known as Sugidama, which literally translates to meaning round cedar balls. This particular shape retains water, makes it easier for the fern to sprout buds, and makes it ideal for multi-seasonal use. While this Tsurishinobu has been appreciated since the end of the Edo period, Terumasa Fukano added his modern skills to create his special "Sakabayashi" cedar ball. Because Miwa Shrine enshrines the god of alcohol in its cedar trees, this special Tsurishinobu cedar ball is crafted out of cedar leaves. The inspiration was to create a trademark for liquor stores connected to Miwa Shrine. Sake breweries now hang these Sakabayashi to signify that they have brewed a fresh batch of sake.